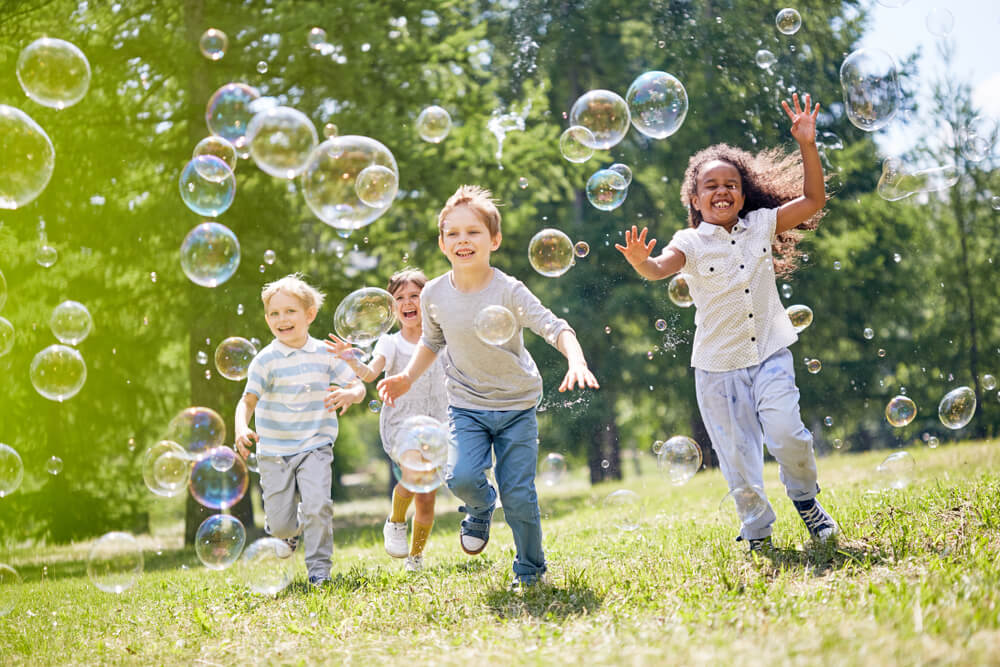 Once upon a time on a cold day in March, I opened the calendar and started to plan summer for my kids. My sons were eight and ten, so I was thinking about Zoo Camp, Scout Camp, Enrichment Classes . . . the usual roster of “fun” summer activities. But when I approached them with these choices, they slumped with disinterest. “Can’t we just play?” they asked.

Play! It used to be the focal point of childhood, but these days it is often relegated to the sidelines. Homework, competitive sports, dance, karate, and other organized activities have pushed it aside to make sure a child’s resume is nice and full by the time high school begins and thoughts of college applications loom large.

On that day in March, as I looked into the stressed and exhausted faces of my children, I realized they were in serious need of play. I ditched all ideas of planned activities and left the summer completely open. They played.

Then I wrote a book about it.

How I Learned to Stop Worrying and Love Play

Because I was working from home, I was able to finagle my schedule to work in the morning and keep our afternoons free for the town pool or other low-key activities. After breakfast, the boys played on their own, and sometime after lunch, we met friends at the pool, in a park, or at someone’s home. That’s it. That was the summer.

Though they did get bored and whiny at times, they never once wished they had their old schedule of activities back. In fact, the few times I tried to plan an outing—to a movie or a nature preserve—they howled and complained that they would rather stay home and play. They seemed to have an unending appetite for just fooling around. They made silly movies with a flip camera, built Legos, made up stories with their stuffed animals, dressed up as superheroes, or just puttered around in their rooms with action figures. It all sounds like a huge waste of time when compared with the usual roster of skill-building that occupies kids’ days, but my children were more content and balanced than I had seen them in a long time.

The Value of Free Play

Because I saw the transformative power of free time and independent play in my children’s lives, I have since become an advocate for free play. More than mere fun, independent play is an absolutely essential tool to grow children’s imagination, autonomy, resilience, and confidence. Myriads of studies have shown that free play builds executive function skills, improves problem-solving and mathematical skills, fosters creativity, and increases confidence by letting kids conquer risk. Limiting the hours in free play limits growth in these areas. Thankfully, since the pandemic, there does seem to be a slight swing of the pendulum back toward the idea that free play deserves a prominent place in a child’s life.

However, promoting free play was not the reason I wrote the book. My original impetus for writing the book—or rather, living the book—was that I simply wasn’t enjoying motherhood. Many of the things I had looked forward to as a mother—reading and snuggling at bedtime, lingering over the dinner table with silly stories, enjoying nature and playgrounds together—never had a chance to happen because we were too busy. Mostly, we just ping-ponged around from school to karate to music lessons to carefully orchestrated birthday parties to video games. I told myself I was enjoying it, but it was more like I was checking boxes and then feeling relieved that I had checked them, which is NOT the same thing as fun.

Letting kids be “free” all summer definitely had its challenges. Their toys and Legos were everywhere, all the time. They bickered. They whined for screens many times. They stayed in their pajamas way too late in the day. From the outside, I am sure I looked like a slacker mom.

On the inside, though, amazing things were happening. They stopped depending on me for direction. They entertained themselves. As they became less clingy, I relaxed and was able to enjoy them all the more. Once we all recovered from over-scheduling burnout, and once I really digested the fact that these years were NEVER GOING TO COME AGAIN, I was able to appreciate our days together so much more. I lived in the moment, without wondering what it all added up to. I embraced the idea that, for an eight-year-old, pretending to be Spiderman is just as valuable as doing a math packet. It’s just the math packet has a more obvious and immediate result.

I learned that my children needed downtime and independence, and without it they were becoming anxious and cranky. The kids needed more time to move their bodies freely (recess play as opposed to gym class play), and they needed time to let their imaginations spiral. They needed to be prohibited from screens so that their natural ability to entertain themselves could grow. They needed time each day to choose their own pursuits instead of being directed in what and how to play. The world as it exists was not able to give them any of those things. Those gifts could only come from my husband and me. We had to clear the space to make that happen.

I learned to let them make mistakes, which is a super useful lesson. As they go through high school and college, they make tons of mistakes (spoiler alert), so I got to practice breathing, accepting, and letting them deal with consequences.

I learned to appreciate their unique selves instead of comparing them to others.

But the biggest lesson of all was the reminder that life goes by fast, and childhood even faster. During those blurry years when I had my children on loan from the future, I wanted to savor the days. Spending afternoons together, allowing them to blossom in their own time, appreciating their quirks and their affection, is what made those days so worthy and created fertile ground for all of us to grow.

Summer ended, as all summers do. But I had a new attitude toward my family. It was okay if we were different. It was okay if we didn’t “keep up.” Our time to be a family together under one roof is limited, and we wanted to have plenty of time to revel in it.

Pam Lobley is a comedic writer of plays, columns, and books. Her memoir, Why Can’t We Just Play? What I Did When I Realized My Kids Were Way Too Busy, details the year she let her stressed, over-scheduled children, take the summer off from their busy activities and “just” play. She lives in New Jersey with her husband—actor Bill Lobley—a dog, and an almost-empty nest.