Home » Shop » The Everything Princess Book

The Everything Princess Book 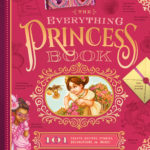 Filled with crafts, stories, recipes, and tips on how to reveal your inner royalty, The Everything Princess Book teaches every girl how to play the role of queen-to-be.

Barbara Beery, founder of Foodie Kids Culinary Center in Austin, TX (one of the country's first kids-only culinary schools), has taught thousands of children over the past 30 years through year-round classes, cooking birthday parties, and summer cooking camps.

Barbara worked as a spokesperson for such national companies as Sun-Maid Raisin, Uncle Ben's Borden's, Kellogg's Rice Krispies, and Step 2.

Since 2002, Barbara has been a contributing writer to FamilyFun, the country's leading family magazine. She has appeared twice on the Today Show, on CBN with Pat Robertson, and her business has been featured in the New York Times and Entrepreneur Magazine, as well asdozens of other local and national publications.

David Miles is the author of Book and has illustrated multiple series including the Slide-N-Seek novelty books and the Let's Count regional board books. David and his wife and son live in California where they enjoy lots of tacos, donuts, and books.